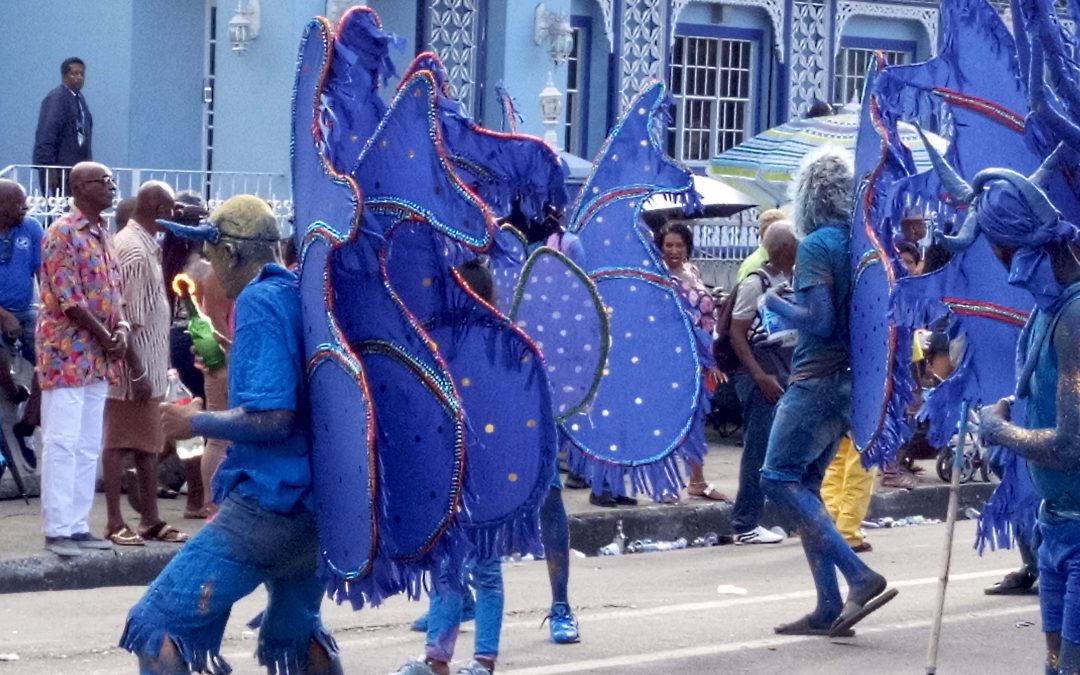 AN INSIGHT INTO TRINIDAD’S CARNIVAL – BY RAY MEDHURST

Carnival’s origins lay in Europe. Centuries ago, followers of the Catholic religion in Italy started the tradition of holding a wild costume festival just before Lent, a period of fasting, moderation, and self-denial. Eating meat during lent was forbidden and they called their celebration ‘carne vale’ which literally means a ‘farewell to meat’ or a ‘farewell to the flesh’!

Trinidad’s Carnival began in the 1780’s with a unique interaction of customs from both Africa and Europe. The West African slaves and French planters brought their traditions of masking and street processions from across the Atlantic, and these have evolved and been recreated on Trinidadian soil for over 200 years. From intimate masked balls and sugar cane harvest processions during the colonial era, it has evolved into a unique world-class festival that has inspired worldwide imitations in various locations across the world including Notting Hill, Toronto, Miami and Brooklyn.

There are many Carnivals throughout the Caribbean, but Carnival in Trinidad is the largest and most spectacular, with the streets of the Port of Spain swarming with revellers. There can be more than 5000 people in a single ‘band’ (a band of masqueraders) and preparations begin months before, with designers creating themes or concepts, and then developing the costumes for the members who will parade and dance through the streets. Calypso tents and steel bands preliminary competitions begin before Christmas, all hoping for a title during Carnival. It is often said that if Trinidadians are not celebrating Carnival, they are either preparing for it or reminiscing about it.

Probably the most exciting part of Carnival for me is the music. Songs about love, life, social and political issues, about the joy of Carnival itself and everything else West Indian, all create the backbeat to the festivities. Music has always been an integral soundtrack for the festivals, as chantuelles and drumming-led processions back in the 1800s, and calypsos (which emerged in French/Patois in the late 1800s and in England in the early 1900s) together with steel bands (which emerged in the hills of the Port of Spain in the 1930s) provided the music for masqueraders for much of the 20th century.

Carnival season starts early, essentially kicking off the day after Christmas Day. Carnival parties (or fêtes) begin and the radio airwaves and local TV music channels are saturated with the latest soca music. It is the irresistible rhythms and infectious melodies of soca – soul of calypso-pioneered by Garfield Blackman (aka Ras Shorty I) in the 70s as a fusion of calypso and Indian music – that are the driving beat on the road during Carnival as well as in all the pre-Carnival parties. Meanwhile, throughout the neighbourhoods of Trinidad and Tobago, panyards begin to resonate with the unique and beautiful sounds of steel orchestras as they choose their song and develop their arrangements for Panorama. Steel drums were literally forged from 55-gallon oil drums. They are the national instrument of Trinidad and Tobago and the only acoustic instrument invented in the 20th century.

The week before Carnival, the excitement builds with wall-to-wall fêtes, events and competitions. The Thursday night sees Calypsonians vying for the title of Extempo Monarch – a form of extreme improvised Calypso that is not dissimilar to a rap battle. Early on Friday, stick-fighters, moko jumbies dancers and a cast of actors descend on the east Port of Spain to re-enact the Canboulay Riots, which were clashes by the descendants of freed slaves of Trinidad fighting with British police who were attempting to crack down on aspects of the celebration in 1881. Just like Sydney’s own Mardi Gras, Carnival was, in part, born out of a riot.

In the early afternoon of Friday, traditional Carnival characters parade through the streets in the Port of Spain. And in the evening, the biggest soca stars begin to battle for the Soca Monarch crown in The Hasely Crawford Stadium. On Carnival Saturday, the streets belong to the children attending the Kiddies Carnival at the Savannah; some of the finest costume designs are seen here. As night falls, the streets around the Savannah are literally filled with steel drums as the steel drum orchestra, some with up to 120 players, prepare to compete at Panorama, the greatest showcase for the instrument anywhere in the world – and for me, the musical highlight.

Sunday, or Dimanche Gras, is reserved for two of the hallmarks of Carnival; the breathtaking costumes of would-be Kings and Queens of Carnival, and the finals in the race for the Calypso Monarch crown. From 4.00am on Monday morning, hordes of people slither through the streets of the country’s cities covered in paint, grease and mud. This is J’ouvert, which means opening or daybreak, with traditional Carnival characters like jab jabs, blue devils and bats, alongside those in outrageous costumes – or just old clothes! Also, there is ‘The Bomb’, a competition on the streets where the steel drum bands show off their skills at non-calypso tunes such as rock, pop and classical music. As I watched the sun rise over Victoria Square with a Carib in my hand, a steel band played ‘What A Wonderful World’ which pretty much summed up the experience.

Once the sun comes up, many stagger off home for a brief rest before the next event which starts around 11 in the morning, when thousands flock into the Port of Spain the meet their band and begin the first parade of the bands. Almost no-one is in full costume on this day – the joy is simply being in the streets with the music and partying continuing well after dark.

Tuesday (Mardi Gras) starts early, with bands taking to the streets, this time in full costume, creating the visual spectacle that the Carnival is famous for. They dance along specific routes between judging posts where adjudicators choose the Band of the Year. Soca blares at house-rattling volumes from massive sound systems on trucks, as band members go wild and try to impress as they pass the judging points. The song that is played most often in front of the judges is crowned Road March.

Things begin to slow down around sundown, but many revellers keep going with the bands, following the huge music trucks until late at night, ending up at a ‘Last Lap Fête’ at the Savannah.

Ash Wednesday dawns, and it’s as if the Carnival never happened…

Trinidad may not be considered by some to be the most sparkling jewel in the Caribbean, but when she puts on her party outfit, no-one can outshine her.